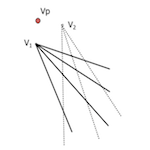 Using the laws of duality in projective models can get a set of properties and dual theorems from other previously deducted. Obtaining homologous elements in the projective case series was performed by obtaining intermediate pespectividades allowed perspectival do we get what we have called “projective axis”. We will see that in the case of projective bundles, Dual reasoning leads us to determine projective centers.

The “world” points is more affordable than didactically straight dual, so we have started the analysis with the concepts associated with rectilinear series for, now, carry out development in dual forms, straight beams.

We can consider in this study a series of basic questions that will help guide the development:

A fourth element beam vertex x “V1” shall have one new ray x’ homologue beam (projective) base (vertex) “V1”” so that the cross ratio of quaternions is retained determining: 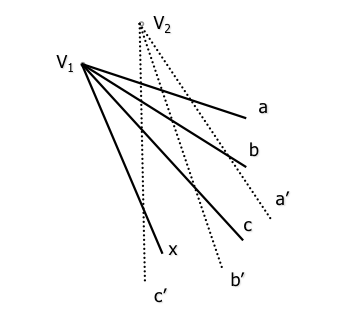 To determine the homologue of x will operate using intermediate between sets that relate perspectividades (sectioned) elements of both beams. 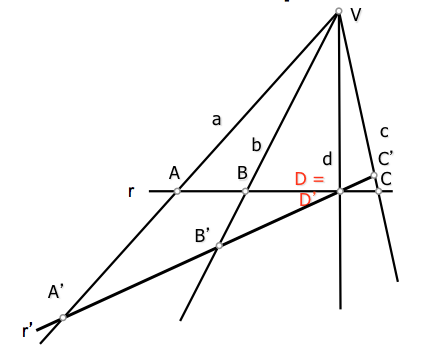 By studying the perspectivity we saw that series of perspectives (perspective center with a common vertex hazproyección), have a double point that is contained in the base (intersection of the straight brackets) series.

In the figure the double point is D = D’ containing a straight r and r’ series of perspectival perspectival center point with V.

This property is essential for finding prospects series linking the two projective bundles which means simplified treatment, as discussed below.

Given two projective bundles freely V1 and V2, proceed to cut them by two lines r and r’ determining series with those prospects that are doing. Among the countless pairs of lines that we can use to sever these beams, choose two passing through any point of intersection of two homologous elements of the beams. The point D = D’ contains the pair d-d’ of these beams. 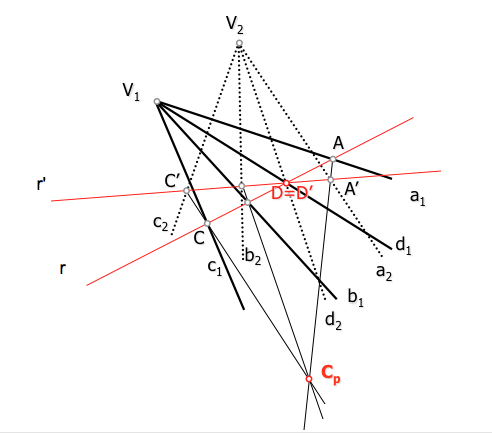 Point Cp is the perspective center of the series de bases r and r’ that section of the beam rays. Varying any of the bases of the series (r o r’) on section D-D ', this series will continue to be prospects (having a double point) but the perspective changes from center position. Although the center change, construction for determination of homologous elements remain equally valid.

Rays m = n’ projection of the two bases (rectas V1-V2) have peer-projection from the center of the corresponding bases. 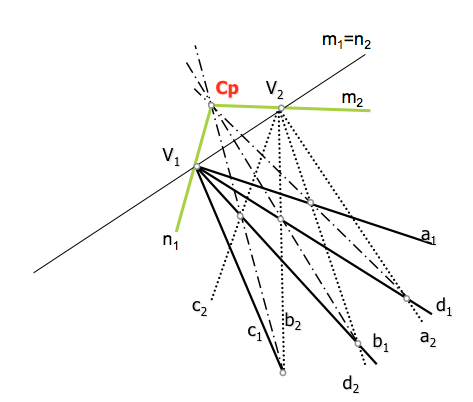 We will see later how to use the projective center to determine pairs of homologous elements of the beams.